Posted on September 21, 2015 by Sustainability Scott

Here is one that many of you will find creepy. The tarantula hawk wasp actively seeks out tarantulas and attacks them. Its sting paralyses the tarantula and, once stung, the wasp drags the spider back to its nest and lays an egg inside it. The egg hatches into a larva that consumes the tarantula from within. Although large in size the wasps feed on nectar, although they have been known to feed on fermented fruit. This is often amusing as the wasps get extremely drunk from the fruit and lose the ability to fly straight. Not highly aggressive, the wasps will sting if threatened and are said to have the second most painful sting of any animal, the first being from a bullet ant. A researcher described the pain as, “ like an electric wand that hits you, inducing an immediate, excruciating pain that simply shuts down one’s ability to do anything”. Another researcher said the pain was “beyond imagination”. Probably one to avoid if you see it in the garden.

Back on track now with something cute and fuzzy. Actually it’s not cute but it is fuzzy. The panda ant is so called due to its similarity in colouring to a giant panda and its ant like shape. However, it is in fact as wasp which is disguised as an ant. Only the males are winged and so the females are almost identical to ants. They are extremely deadly however and it has been reported that their sting is strong enough to bring down an adult cow. Unfortunately for them their ant like appearance appears to be backfiring as they are becoming endangered, due in no small part to predation by anteaters.

The weird, but somewhat loveable, proboscis monkey comes next. With the males having large noses and pot bellies they are certainly very unusual. Native to Indonesia, the local people called them Orang belanda, which translates to “Dutchman”. This was because they thought the monkey resembled colonising Dutch people due to their large noses and large bellies. It is thought that the large nose helps males to attract females as it creates a large echo chamber, which means the monkey can make a louder call, and attract females from further away. The monkeys tend to communicate using honking noises which is unusual in the world of primates. 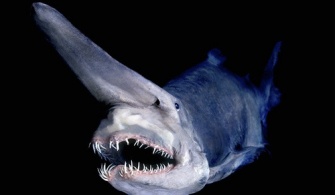 As you probably expected the number 1 animal on the list comes from deep beneath the waves. The goblin shark certainly is weird but they are so rare that very little is known about them. They are known as “living fossils” as they are thought to be the most primitive of all the “mackerel sharks”, a group that includes the great white. Due to living in extreme depths it is very difficult to locate food visually and it is thought that the goblin shark’s long nose senses electric impulses of passing prey, allowing the shark to ambush anything that swims past. The shark is found in most of the world but only at extreme depths so it is still safe to go swimming, probably…..