Posted on November 3, 2015 by Sustainability Scott 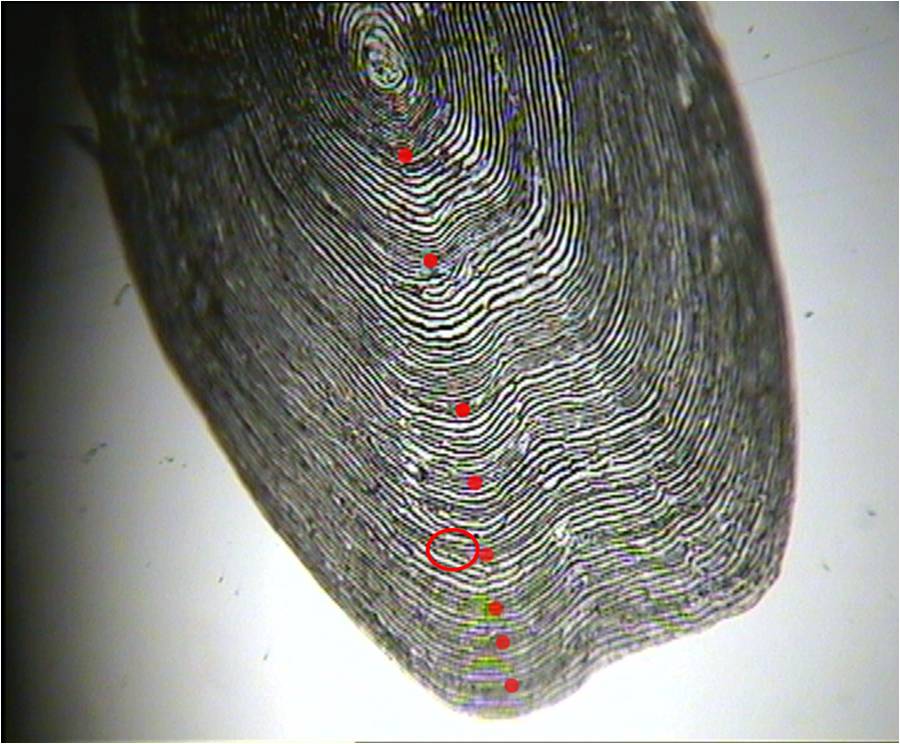 Anyone who watched Autumnwatch last night will have seen the piece whereby researchers were able to derive a vast array of information about a fish from only one scale. It seemed like a ludicrous amount of information but scale reading is quite common although it is very difficult to do well.

The process is a simple one at first glance. Catch a fish, remove a scale and then analyse it under a microscope. The resulting image is bit like a human fingerprint crossed with a tree ring. In this case though the growth rings made from protein overlaid with calcium, which can tell us a lot about the life history of the fish.

Firstly the rings are laid down in distinctive patterns. As the image above shows there are periods where the lines are closer together and times when the are farther apart, helpfully illustrated with red dots. The close together lines indicate times of slow growth which corresponds to winter months and vice versa. This means the age of the fish can be measured by working out how many winters it has lived through.

Secondly the rings also indicate if the fish has spawned (laid eggs). During times of stress, such as spawning, the fish has a need to reclaim nutrients from its tissues and use them for egg production which results in a distortion in the scale. Usually the rings are laid down concentrically but when this nutrient reclamation occurs the lines can cross over, this is show in the red circle. The image isn’t great but I assure you that it does show that!

This means one scale can tell us how old a fish is and how many times it has spawned. This is extremely useful for marine biologists who are monitoring fish populations.